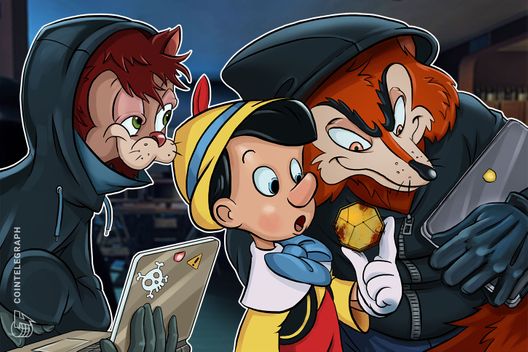 Authorities fed information about related schemes to an “AI Investigator” as part of a sting operation to catch the scheme’s two perpetrators.

The scheme, which reportedly stole a total of 21.2 billion won ($18.3 million) over a six-month period in 2018, came to an end after the Seoul Special Judicial Police Bureau for Public Safety trained robots to catch those involved using keywords and other clues.

“Through keywords such as Ponzi, loan and recruiting members, we were able to teach the AI patterns of Ponzi schemes,” Hong Nam-ki, section chief of the bureau’s second investigation team, told the publication. He added:

“The program can also identify advertisement patterns and identified the enterprise in question, which [was caught] with evidence provided by an unnamed informant.”

The CEOs of the scheme, known only as Lee and Bae, amassed considerable sums of cash through selling private digital tokens called M-Coins, along with membership fees from recruits, Korea Joongang Daily states.

In line with similar schemes involving cryptocurrency, the figures took advantage of the public’s lack of knowledge of the space to part them from their fiat investments.

“In our stakeout, we saw that most people attending the swindler’s presentation for membership were elderly people in their 60s and 70s,” Hong Nam-ki said.

As Cointelegraph reported, Ponzi schemes remain a persistent phenomenon despite the increasing legitimacy of cryptocurrency in the public eye as a whole.

Earlier this year, authorities caught up with the controllers of OneCoin, a notorious international quasi-pyramid scheme which ran for several years and promised investors huge fortunes.

Based out of Bulgaria, OneCoin also sold its own token, with Cointelegraph warning about its lack of reputability as early as 2015.