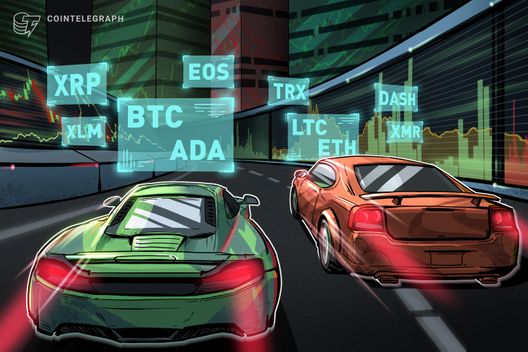 Bitcoin saw its third worst drop of 2018 on Nov. 14, as it broke down to new year-to-date lows. After the recent fall, how should traders approach the markets?

Bitcoin saw its third worst drop of 2018 on Nov. 14, as it broke down to new year-to-date lows. In doing so, it broke through the critical support of $5,900, which had held throughout the year. Prior to the breakdown, Bitcoin had entered a period of low volatility not seen in years.

We were expecting the resolution of the tight range in cryptocurrencies to be to the upside, hence, our bias was on the long side. However, with the fall, the technical picture has weakened, and our assumption was proven wrong. We need to reassess our strategy in this new backdrop.

Interestingly, not all cryptocurrencies have followed Bitcoin to new year-to-date lows. There are a few that have held out quite well. Ripple has overtaken Ethereum as the second most valuable cryptocurrency in terms of market capitalization. So, there are some bright spots even in this mayhem.

Bitcoin Cash has completed its fork without any major incident. However, as it is still in its early days, we have skipped analyzing either coin today.

After the recent fall, how should traders approach the markets? Is it time to step aside and wait, or do some cryptocurrencies offer a buying opportunity? Let’s study the charts and find out.

The pullback from the intraday lows in the past two days shows that the lower levels are attracting buying. This points to a retest of the breakdown level of $5,900 in the next 4–5 days.

The performance of the BTC/USD pair at the $5,900 levels will give us a better idea on what to expect. If the bulls easily breakout and sustain above $5,900, then this current fall will be a fakeout, which took out all the weaker hands on the long side, before moving up.

On the other hand, if the bears defend the $5,900– $6,075 levels and the virtual currency turns down from there, it will indicate selling by the long positions stuck at higher levels and short initiation by traders who anticipate lower levels in the future.

So, what should traders do?

A new year-to-date low shows weakness, hence, long positions should not be initiated until a bottom is confirmed. As the RSI is deep in the oversold territory, a short position is also not advisable, because a sharp pullback can occur at any time. Due to the uncertainty, it is best to sit out and wait for a few days.

If price scales $5,900 and sustains above it, we might attempt to go long once again. Any break above $6,832 will be a confirmation that a new uptrend has started. Until then, the digital currency is at a risk of turning down again.

Analysts will mention various lower levels that can be scary. Let’s take it one step at a time and act accordingly, without being influenced by the noise.

Ripple is showing considerable strength and is well above its year-to-date lows. In fact it did not even fall to its first major support at $0.37185 in the recent carnage, which shows strength.

Currently, the XRP/USD pair is facing resistance at the moving averages. If this is crossed, the downtrend line is the next resistance. We believe there will be a strong defense of this zone from the bears.

After the downtrend line is crossed, the digital currency might move up to $0.565 and above that to $0.625. The flat moving averages and the RSI close to the midpoint suggests a range formation in the near-term.

Any break of $167.32 will resume the downtrend, plunging the ETH/USD pair to the lower levels of $136 and $110. The 20-day EMA has started to turn down while the RSI is close to oversold levels, which shows that the bears have a firm grip in the near-term.

However, if the bulls rebound from the support and sustain above $188.35, it will increase the probability of a consolidation. First indication of a new uptrend will appear when the digital currency sustains above $249.93.

Stellar continues to trade inside the ascending channel. However, its intraday low of $0.21494424 on Nov.15 triggered our suggested stop loss of $0.22. For the past two days, the bulls have bought aggressively on sharp dips, which is a positive sign. This shows that the buyers are using lower prices to add to their position.

The moving averages are currently flat and the RSI is close to 50 levels, which points to a consolidation in the short-term. If this support line of the channel holds, the XLM/USD pair is likely to move up to the top of the channel. We shall wait for a new buy setup to form before proposing long positions.

EOS broke below the support of $4.493 on Nov. 15, but buying at lower levels pushed prices back above it. Currently, the bears are again attempting to break below the support and sink prices to the next support zone of $4.1778–$3.8723.

The down sloping 20-day EMA and the RSI in the negative zone show that the sellers have an upper hand. The downtrend will resume on a decline below $3.8723.

If the bulls succeed in defending the support zone between $4.1778–$3.8723, the EOS/USD pair will extend its stay inside the range. We shall wait for it to stabilize and show signs of a turnaround before turning positive on it.

Litecoin made successive new year-to-date lows on Nov. 14 and 15, which shows that it is one of the weaker cryptocurrencies.

After breaking below the support at $47.246 on Nov. 14, it followed up with a new low the next day, which was close to our first lower target of $40. Though prices have bounced from the lows, the pullback lacks strength. Even small intraday rallies are met with strong selling pressure.

If the LTC/USD pair breaks down of $40, it can slide to the next support at $32. The down trending moving averages and the RSI in the oversold zone show that the sellers are in command.

The first signs of recovery will be when the digital currency climbs back above $50 and sustains it. Until then, every pullback will be sold into.

Cardano broke below the critical support of $0.060105 on Nov.15 but the bears could not sustain below the lows.

The bulls are currently trying to keep prices above $0.060105, while the bears are attempting to break below it.

Monero bounced off the critical support at $81 on Nov. 15, but higher levels are attracting selling by the bears. A break of $81 will resume the downtrend and sink prices towards the lower support at $61.50.

If the bulls succeed in holding $81, a pullback to $100.453 is probable. If the price rises above $100.453, the XMR/USD pair might extend its stay in the range. We shall wait for a confirmation that the short-term bottom is in place before suggesting a trade.

Dash is currently attempting to hold the support at $129.58. If the bears break below this level, the next stop is $113. If this level also gives way, the slide can extend to $87.

The down-sloping moving averages and the RSI close to the oversold level shows that the bears have an upper hand and the path of least resistance is to the downside.

However, if the bulls succeed in defending the $129.58 level, a rebound to the 20-day EMA, followed by a move to the downtrend line is possible. We shall wait for the DASH/USD pair to sustain above the downtrend line before turning positive.