BTT price has increased by over 600 percent since its recent ICO in late January which sold out in minutes.

BitTorrent token’s (BTT) price has gone up over 600 percent since its initial coin offering (ICO) which sold out in minutes, according to the data from CoinMarketCap on Feb. 4.

Peer-to-peer torrent client BitTorrent, which allows users to distribute files over the Internet launched its Tron-based native token BTT in the beginning of January. BTT is purportedly part of a broader ambition to build a decentralized content distribution platform using the digital currency.

On Jan. 28, the BTT sale on the Binance Launchpad platform made headlines, netting $7.1 million dollars with the sale of 50 billion tokens in under 15 minutes. Tron CEO and founder Justin Sun officially announced then that all 23.76 billion BTT had been sold within 13 minutes and 25 seconds at a price of $0.00012 per token.

As press time, BTT is trading around $0.000885, a 629 percent price hike since the ICO and a 47 percent increase over the last 24 hours. The coin’s trading volume over the last day is around $360 million, while its total supply is 990 billion BTT. 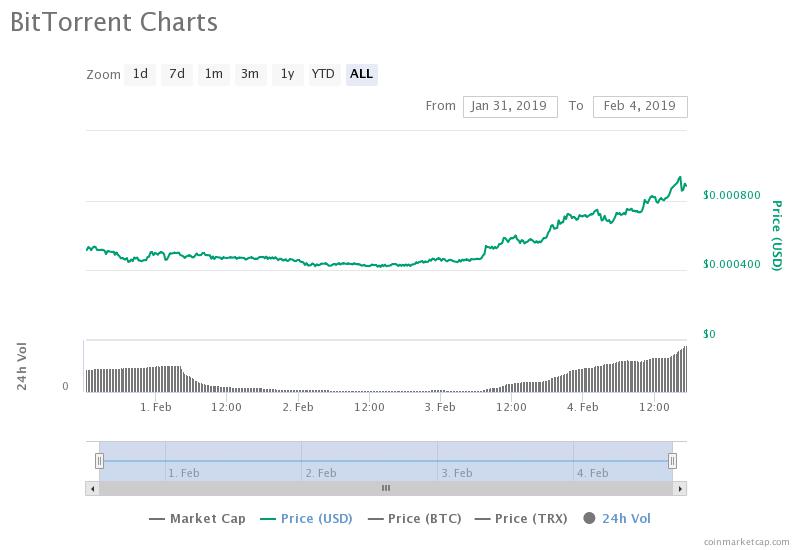 For the same period, the leading digital currency by market capitalization Bitcoin (BTC) has lost around three percent, the second largest coin Ripple (XRP) has gained around 3.4 percent, while Ethereum (ETH) has increased by around 2.8 percent, per data from CoinMarketCap.