↓
Home Menu ↓
Home→News→Coinbase’s 2018 Revenue Is 60% Less Than Projected by the Firm: Report 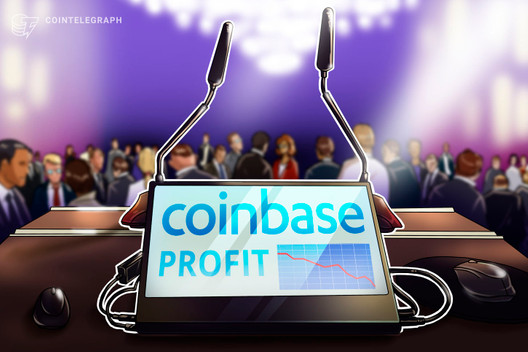 Major U.S.-based crypto exchange and wallet Coinbase forecasted its 2018 revenue to be 60% higher than its alleged actual total.

The publication calculated the sum by looking at a filing to Britain’s corporate registry last week showing Coinbase’s non-U.S. revenue equaled around 154 million euros ($173 million), noting that a Coinbase executive once stated that the non-U.S. revenue is equal to almost one third of the overall revenue

Based on Reuters’ calculations of Coinbase’s 2018 revenue, the crypto exchange has generated 60% less than its stated plans.

In late October 2018, Bloomberg published an article claiming that Coinbase had projected that it would see $1.3 billion in revenue in 2018. Based on unspecified documents, Bloomberg wrote that the San Francisco-based crypto exchange foresaw significant revenue from commissions on trades, as well as from gains and losses in its crypto holdings, despite the bear market.

In January 2018, industry sources reported that Coinbase made about $1 billion in revenue in 2017, overshooting its forecast for that year by 66 percent.

The Cointelegraph team has not found any official data from Coinbase about its revenue for either 2017 or 2018.

Founded in 2012, Coinbase is a major crypto trading and wallet service based in the United States. Recently, the exchange was featured in LinkedIn’s list of the most popular companies for 2019, with Coinbase placed at 35 out of a total of 50 companies.

On April 17, Coinbase expanded its crypto-to-crypto trading offering to 11 countries in Latin America and Southeast Asia, including Argentina, Mexico, Peru, as well as South Korea, Indonesia, the Philippines and others.

Meanwhile, Binance, currently the third largest crypto exchange, was recently reported to have made $78 million in profits in Q1 2019, up 66% from the previous quarter.

In a previous version of the Reuters article, the publication reported that venture capital investments in crypto and blockchain startup have the potential to set an all-time high in 2019, as investors also appear to be contributing larger amounts per deal.