↓
Home Menu ↓
Home→News→Heads of Bitmain, Binance and Other Crypto-Related Businessmen Among China’s Richest 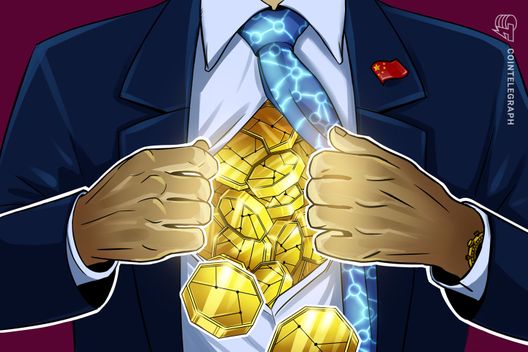 The rise of blockchain technology and cryptocurrencies have made many people rich, but the world’s smartest entrepreneurs in the space are beginning to make waves among the world’s richest conventional business minds.

The Hurun Research Institute released its annual China Rich List on October 10. Included in this list of 1,893 individuals are 14 people who have made their fortune from cryptocurrency and blockchain related business ventures.

According to the Hurun list, the 14 new names on the list from the blockchain space make the industry the fastest growing in terms of representatives from one specific industry.

It is hardly surprising that global crypto mining giant Bitmain and its directors are leading the pack in their industry, given the meteoric rise in value of the Chinese company. Since its inception in 2013, the company has established itself as the biggest manufacturer of cryptocurrency mining equipment in the world.

Topping the list of crypto entrepreneurs is Micree Zhan Ketuan, co-founder of Bitmain, with an estimated wealth of 29.5 billion yuan ($4.3 billion). He is the only crypto-billionaire in the top 100 of the Hurun Rich list.

Following him is fellow Bitmain cofounder Wu Jihan who is worth 16.5 billion yuan ($2.4 billion), coming in at 204 on the prestigious list. The third Bitmain cofounder Zhaofeng Zhao, as well as Bitmain vice president Yuesheng Ge, and shareholder Yishuo Hu are also featured on the list.

The company’s success over the past few years has been astounding, but it has also been met with some trepidation from the wider cryptocurrency community.

Bitmain has been hit with criticism for its stranglehold on the Bitcoin mining sphere, as well as its aggressive tactics when it comes to launching new ASIC mining hardware. The likes of Siacoin and Monero have taken active measures to make their mining protocols ASIC-resistant.

That hasn’t stopped the company from forging ahead in what has been a highly lucrative enterprise. In the first quarter of 2018, Bitmain reportedly made over $1 billion in profit. In July 2018, the company was officially valued at $12 billion after a series B round of funding.

The biggest talking point of 2018 centered around Bitmain were reports in June of a potential launch of an intended initial public offering (IPO) on the Hong Kong Stock Exchange scheduled for September. This mainly came from comments from Wu, who had hinted at the possibility of an IPO. Investment analysts were speculating that the company could raise anywhere between $3 to $18 billion.

With plans to launch the IPO in the public sphere, a number of companies, including Softbank, Temasek, Tencent, and DST Global, which were linked to the listing, distanced themselves from the move.

Nevertheless, Bitmain filed a draft application for listing on the Hong Kong stock exchange late in September, bringing the IPO one step closer to life.

While Bitmain has become a household name in the crypto mining world, the men who founded its competitors Canaan Creative and Ebang International Holdings are also among China’s richest, namely Canaan’s founder Zhang Nangeng and Ebang’s Hu Dong.

These companies are also forging ahead with planned IPOs by the end of 2018.

The success of Binance, which has become the biggest cryptocurrency exchange by trade volume in the short two years of its existence, has made Changpeng ‘CZ’ Zhao the third richest from the crypto community with an estimated worth of 15 billion yuan ($2.1 billion).

The success of his company is staggering, considering it got off the ground in July 2017, courtesy of an initial coin offering (ICO) which raised $15 million. The platform allows users to trade cryptocurrencies with various altcoins, as well as the platforms native BNB coin.

The company has also set up a bank account in Malta, in the hopes of allowing fiat currency deposits, withdrawals, and trading on Binance in the future.

CZ is followed by fellow crypto exchange founders Xu Mingxing ($1.4 billion), who started OKCoin and Li Lin ($1 billion), the man responsible for the launch of Huobi. 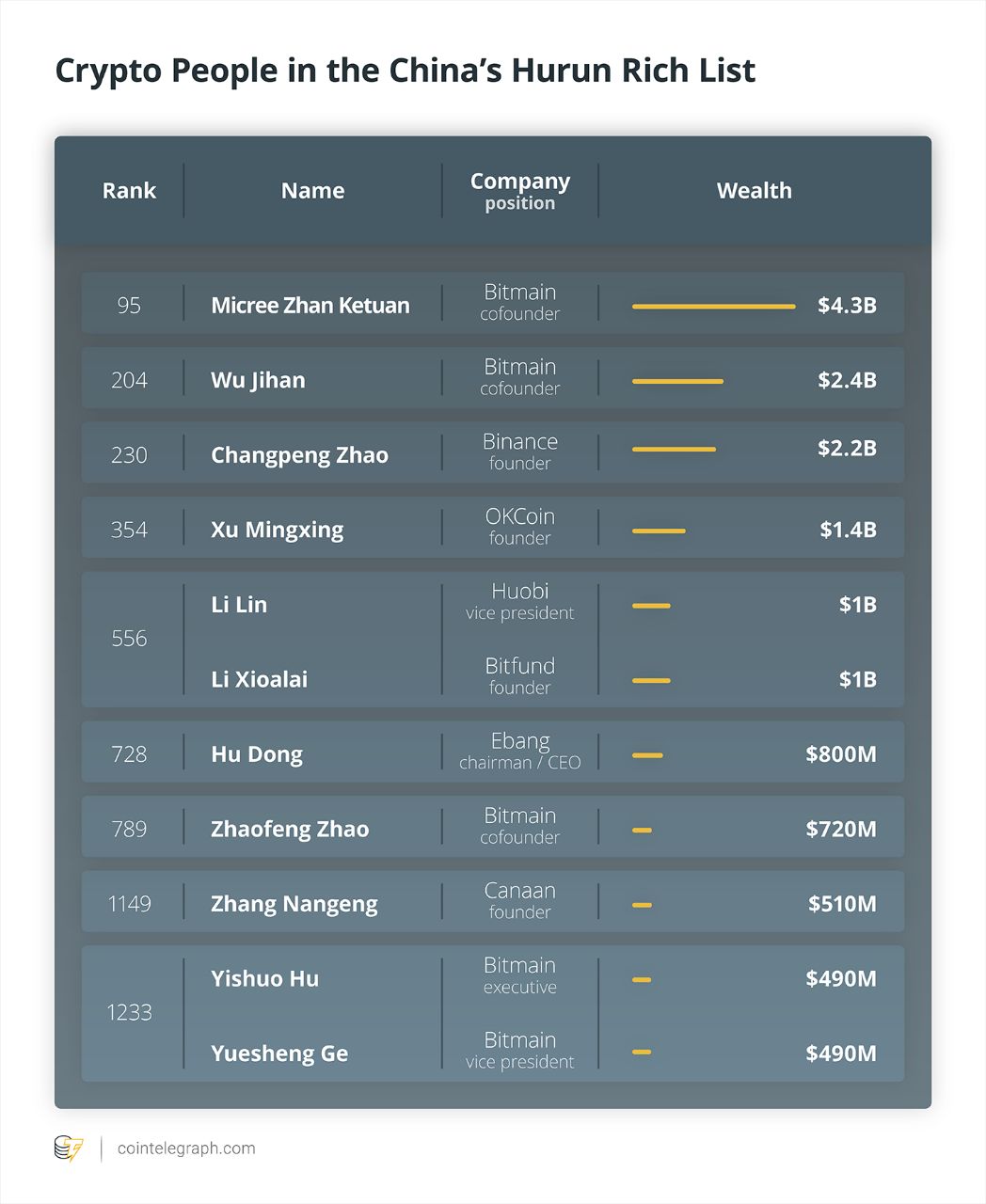 The entrepreneur may have made a fortune investing in blockchain-based projects and ICOs, but he has now distanced himself from the industry.

At the beginning of October, Li announced that he would no longer be investing in blockchain projects for the foreseeable future. A major reason for his decision is the countless number of projects that have claimed to have his support as an advisor or investor.

Over the past two years, we have seen a number of the greatest minds from the blockchain and crypto world ranking among the elite in the business, technology, and financial world.

Forbes, which is renowned for its annual rich list, has even put together a crypto-focused list of the most wealthy in the industry.

Furthermore, Fortune’s 40 under 40 features four of the brightest minds in crypto, who have had major influences in the development of blockchain technology and cryptocurrencies. Following in the footsteps of Forbes, Fortune also has its own 40 under 40 in crypto.

The Hurun List, featuring a number of people from the blockchain and crypto space, is the latest vindication of the impact the sector is having around the world.

China’s rich list requires individuals to have a net worth of at least $290 million, which sets a substantial entry point for individuals to make the list.

Considering the short amount of time since the inception of Bitcoin and the constant development of new technology in the space, the achievements made by people in the crypto sphere and their recognition among global leaders across industries bodes well for the future of crypto.

As Anthony Pompliano suggested in his Off The Chain newsletter, innovators in the blockchain and crypto space could feature more prominently in these lists, as was the case around the time of the commercialisation of the internet: