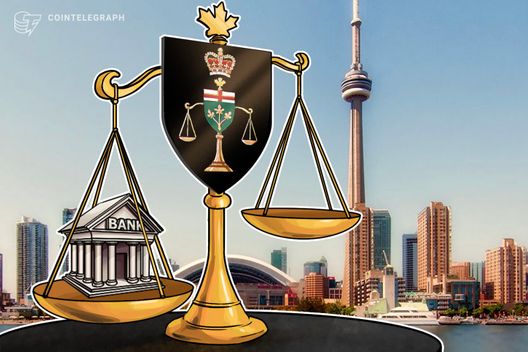 An Ontario Superior Court Judge has ruled with the Canadian Imperial Bank of Commerce in a dispute with Canada’s largest crypto exchange regarding frozen funds.

A $19.6 million disputed sum between Canada’s largest crypto exchange QuadrigaCX and the Canadian Imperial Bank of Commerce (CIBC) has been handed into the custody of the Ontario Superior Court, per a court document filed Nov. 9.

On Oct. 8, Canadian newspaper the Globe and Mail reported that Vancouver-based QuadrigaCX had been experiencing difficulties accessing $16.3 million of its funds since January, when CIBC froze five accounts belonging to the exchange’s payment processor, Costodian Inc., and its owner, Jose Reyes. The bank purportedly froze the accounts due to an inability to identify the funds’ owners.

CIBC subsequently requested the court to withhold the disputed funds and decide whether they belong to QuadrigaCX, Costodian, or the 388 users who had deposited the funds. In response, QuadrigaCX told the court that the bank froze the funds mistakenly and claimed to be the undisputed owner of the greater part of the funds.

Regarding the legitimacy of CIBC’s actions in freezing the accounts, Judge Hainey concluded that he is “not in a position on this record to make any determination as to CIBC’s possible liability for doing so,” adding:

“Accordingly, it would be inappropriate for me to extinguish any liability that CIBC may have for freezing the accounts in the absence of an evidentiary record that establishes that CIBC has no liability.”

Gerald Cotten, chief executive at QuadrigaCX, told the Globe and Mail that “more importantly, the court has made no ruling yet on whether CIBC acted appropriately in freezing the funds in the first place. Regarding this point, we are considering our next steps.”

Today, Cointelegraph reported that lawyers representing payment startup Ripple in its ongoing securities lawsuit are trying to move the case to a U.S. federal court. Court records confirm the application to move the case from the state to federal level, which would allow Ripple to prove definitively that its XRP token is not a security under U.S. law, should it win.

The lawsuit against Ripple Labs was originally filed in May by law firm Taylor-Copeland for the sale of unregistered securities. The claimants all lost money from purchasing XRP at high prices earlier this year, but opted to sue to include all possible parties affected since 2013.