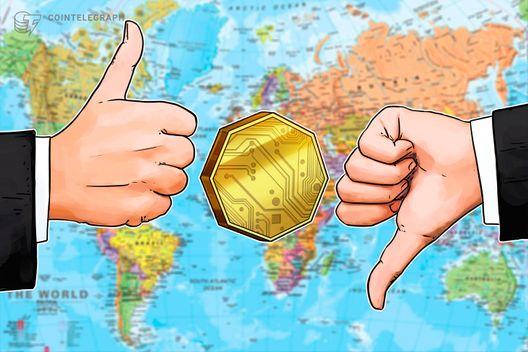 The President of the Republic of the Marshall Islands Hilda Heine has narrowly survived a vote of no confidence vote was prompted by her plans to introduce a national cryptocurrency.

The President of the Republic of the Marshall Islands Hilda Heine has narrowly survived a no confidence vote that was partly prompted by her plans to introduce a national digital currency, Asia-focused English-language publication Nikkei Asian Review reports Nov. 12.

The Marshallese parliament was reportedly split 16-16, just one vote short of the number needed to prompt Heine to resign the office of president.

The country’s parliament had initially backed the creation of a national digital currency, called the Sovereign (SOV), in February of this year, to be distributed and used along with the U.S. dollar, the country’s mainstream currency.

However, as Nikkei notes, the president’s critics had accused the proposed plan for a state-backed cryptocurrency of “tarnishing” the country’s reputation. Alongside eight dissenting senators, former president Casten Nemra was another vocal detractor of the Sovereign.

Nemra reportedly stoked political divisions over the government’s alleged failure to investigate investigate the loss of $1 billion from the Marshall Islands Trust Fund, which set up by the U.S. to compensate Marshallese citizens affected by nuclear tests conducted near the country.

Political tensions were further strained over a Chinese plan to turn the Marshallese atoll of Rongelap into a special administrative zone including a tax-free port and offshore company registration. Several of the senators who introduced the no confidence vote support the plan, while Heine sees the move as a Chinese incursion on Marshallese sovereignty.

Heine is reported to have told the parliament, also known as the Nitijela, that the attempt to overthrow her was a "referendum about our own politics." She has also hailed plans for the Sovereign as a "historic moment for our people."

As both Nikkei and major Israeli newspaper Haaretz report, the Marshallese government’s pursuit of a state-backed cryptocurrency was precipitated by a partnership with Israeli startup Neema, which is said to have persuaded the country’s politicians that the project could bring $30 million, of which half would go to Neema.

According to Haaretz, one of Neema’s owners, Barak Ben-Ezer, wrote this spring that “as a practical matter, SOV […] becomes real money from a legal standpoint […] without capital gains tax, without a securities regulator claiming that the currency is stock. SOV is a sovereign currency like the dollar, the euro and the yen.”

Nikkei today reports that Finance Minister Brenson Wase has declared the government will move forward with the Sovereign, and is waiting to fulfil requirements from the International Monetary Fund (IMF), the U.S. and Europe.

As previously reported, this September, the IMF warned the Marshallese government of the risks of adopting a cryptocurrency as a second legal tender, stating that "the potential benefits from revenue gains appear considerably smaller than the potential costs." It further warned of potential reputational damage, compromised relationships with foreign banks, and risks of money laundering and terrorist financing.