↓
Home Menu ↓
Home→News→Nevermind the Stagnating Market, Binance Is Pushing Further in Its Expansion 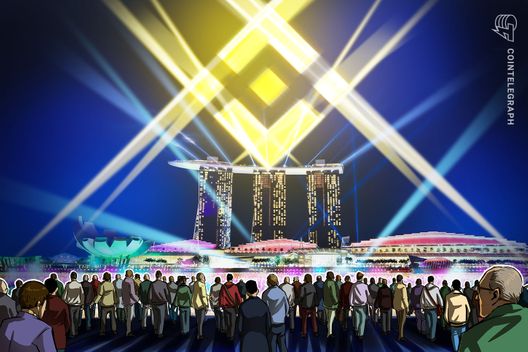 Starting an exchange in Singapore is an ambitious step — the most recent in a series of Binance’s summer activities.

Sept. 15 came with the announcement from the Binance co-founder and CEO Changpeng Zhao (also referred to as ‘CZ’): One of the largest global crypto exchanges will start testing a crypto-fiat exchange in Singapore.

While no further details have been specified, the crypto-fiat Singapore-based exchange will presumably support the local Singapore dollar. A closed beta testing was conducted on Sept. 18., after that CZ shared a hope the platform could start its work within months.

Starting an exchange in the third most favorable country in the world for Initial Coin Offerings (ICOs) is an ambitious step — the most recent in the series of activities Binance engaged in the last few months.

Previously in September, Binance had signed a Memorandum of Understanding (MOU) with the Malta Stock Exchange’s fintech and digital asset subsidiary, MSX PLC. The main goal of the collaboration is the forthcoming trading platform. The official press release didn’t give away many details but highlighted that the future platform will benefit from the Malta Stock Exchange’s “26-year track record of operating as a regulated stock exchange.”

It’s worth noting that on July 19, Neufund — an equity fundraising platform on the blockchain — revealed it’s partnering with both MSX and Binance “to create a regulated and decentralized, global stock exchange for listing and trading tokenized securities alongside crypto-assets.” The company’s press release stated that Neufund will become the first end-to-end primary issuance platform for security tokens and equity tokens, in particular. Binance CEO confirmed the announcement:

“We are glad to partner with Neufund over the pioneering idea to create a complete ecosystem for issuing and trading securities on blockchain. Today’s announcement marks a new chapter for Binance’s development, with the goal to tokenize traditional financial assets.”

This isn’t the first business experience in Malta for Binance. It has steadily been expanding its presence in a country whose pro-crypto regulatory stance has earned it the moniker of “Blockchain Island.” The first time the company announced the opening of its office in Malta was at the end of March, after receiving a warning letter from Japanese financial authorities about its unregistered status.

Earlier this summer, Changpeng Zhao told Cointelegraph in an exclusive interview that the exchange had opened a bank account on the island, paving the way for the introduction of fiat-crypto pairs. Company representatives subsequently hinted at the exchange’s plans to open a Malta-based platform to this end. Changpeng Zhao also praised the “active and transparent crypto regulations” on the island:

The Binance team promised to provide and maintain the technology platform, while Binance LCX would take on customer support, legal requirements, due diligence, Know Your Customer (KYC) and Anti-Money Laundering (AML) compliance and communication with the government. For that particular aim, Binance LCX immediately started the hiring process to build up a team of 10-15 people for its Liechtenstein office. The opening even got a commentary from the nation’s prime minister, Adrian Hasler:

"We are confident that Liechtenstein's existing and future legal framework and practice provide a robust foundation for the Binance LCX and other blockchain companies to provide exceptional services here in Liechtenstein.”

Binance broke into the media space in the first day of summer, revealing the plans to create a $1 billion cryptocurrency-based fund. The exchange decided to use its BNB tokens as an investment vehicle under the governance of its incubator spin-off Binance Labs. The fund stated it would onboard only significant heavyweights as partners, members requiring at least $100 million in asset management. As Ella Zhang, the head of Binance Labs, put it during an online conference:

“We do proper asset management. We like to lock in long-term projects. Investors and entrepreneurs are locked together. Non-believers do not enter.”

Further details were provided by the Binance Labs in August. The program will take on around eight-10 companies per batch for a 10-week period, and Binance Labs will hand out $500,000 to each program participant in exchange for a 10 percent stake in the business. Beyond money, Binance Labs is going to provide its projects mentoring, technical advice, access to the Binance network and support on non-technical, organization-building activities. The last deadline for applications expired on Sept. 14, and the maiden program will be held in San Francisco starting Oct. 9.

Meanwhile, on July 31, Binance made its first public acquisition. The company paid in a mixture of fiat money, Binance stocks and its own BNB token for Trust Wallet, a United States-based, open-source, anonymous and decentralized wallet that supports Ethereum (ETH) and over 20,000 different Ethereum-based tokens (ERC-20, ERC-223, and ERC-721).

CZ stressed that Trust Wallet is a strong team in terms of technical knowledge but requires assistance with their marketing strategy:

“They haven’t done much marketing, which is where we can help. They are strong technically but don’t like doing marketing, HR, etc. […] Now, merging with us, they don’t have to worry about money.”

Apart from boosting the service’s business development, Binance plans to list Trust Wallet as a default wallet on the highly-anticipated Binance decentralized exchange. Zhao said that Binance is considering further acquisitions. Trust Wallet founder Viktor Radchenko lauded the acquisition as an opportunity to return to focusing on developing the app and the technology.

Another major investment came in August, when Binance Labs — along with their rivals from OKEx and Huobi Capital — made a contribution to the $32 million funding round of a new stablecoin project out of South Korea. Dubbed Terra, the stablecoin is going to be integrated into the payment systems of the so-called Terra Alliance, a group of global ecommerce partners that includes, among others, South Korean ecommerce marketplace Ticket Monster (TMON), which boasts a considerable $4 billion in total sales.

“While we see many stablecoins coming out, Terra's journey is especially meaningful, as they are designing one of the few price-stable protocols with [an] existing, working and strong go-to-market strategy and usage.”

It began in Africa

Before Malta, Lichtenstein and Singapore was Uganda. In an exclusive interview with Cointelegraph on June 28, Changpeng Zhao shared the details about the new platform, Binance Uganda, the company’s first foray into fiat-crypto trading — supporting the Ugandan shilling, alongside major cryptocurrencies. It had been said that Binance Uganda would be an independent structure but with a “strong business cooperation” with the existing platform.

Highlighting that Binance is interested in expanding into Africa’s market “in general,” CZ said that work on the Uganda venture has been “progressing really fast,” thanks to strong support from government, regulators and the industry:

“Uganda [is a] really interesting situation, only 11 percent of the population has bank accounts. It’s both a challenge and an opportunity. So it may be easier to adopt cryptocurrency as a form of currency instead of trying to push for bank adoption. It’s an interesting experiment — Africa’s a big market, that’s why we’re there.”

At the recent Consensus Singapore Zhao explained the Binance focus towards the small markets, from such well known tax havens as Malta to the not so obvious African choice as Uganda:

We are willing to work with any government that wants to work with us. Smaller ones are much easier to work with, because you can talk to the prime ministers directly.

Company shows a good spirit, but NY’s Attorney General has some questions

Binance surely isn’t alone in its activities toward embarking into new jurisdictions. Huobi launched in Australia on July 5, with plans for its London-based operations to commence trading in Q3 and U.S.-based operations in the near future. Coinbase, meanwhile, is eyeing Japan and securing a U.S. banking license.

But the company definitely enjoys the optimistic results amid the market crisis and stagnation, which has already been compared to the dot-com bubble burst. Figures compiled by cryptocurrency industry newsletter producer Diar on Aug. 20 show that Binance’s volume increased 21 percent in July compared to June. The exchange currently occupies the fourth spot on CoinMarketCap, with about $1.2 billion in trades over the past 24 hours, as of press time.

In his interview on July 6, CZ shared his expectations of Binance’s profits to reach $1 billion in 2018. In an exclusive interview with Cointelegraph, CZ appeared unfazed by the falling trade volumes — both on Binance and other crypto exchanges — throughout 2018, noting that “markets always overreact” — both when things are going well, and when things cool off — and that he’s “seen this many times: five or six times, on a yearly cycle.”

We may even consider the market crisis a catalyst for the Binance activity. As CZ has put it, preparing for “the next uptick,” Binance is improving its systems to allow for more volume — 100 or 1000 times more than it supports at present. “I don’t know when it’s going to happen, but we’ve got to be ready for it.” Another company representative, freshly hired CFO Wei Zhou told Bloomberg that 300 people from 39 different countries, working for the Binance structures at the moment, will not be enough to support the firm’s ambitious plans for the near future.

At Consensus Singapore, CZ further explained that he wants the company to launch five to 10 fiat-to-crypto exchanges — two per continent — in one year. He also confirmed that Binance stays in a good financial health regardless of the market dip, with $200 million in profits during the first quarter of 2018 and $150 million in the second one.

But one important thing the loquacious Binance CEO didn’t comment on is the possible allegations from the New York State attorney general’s office. On Sept. 18, Attorney General Barbara Underwood released a report, which, among other things, states that Binance, Kraken and Gate.io could be in violation of a series of cryptocurrency-focused regulations and rules — and as such, they should be referred to the New York Department of Financial Services (NYDFS):

“As our report details, many virtual currency platforms lack the necessary policies and procedures to ensure the fairness, integrity and security of their exchanges. With this report, we hope to give New Yorkers the tools they need to make educated decisions on whether to entrust their money to a cryptocurrency platform and to help protect themselves against theft, fraud and abuse.”

The report represents the results of the “Virtual Markets Integrity Initiative” that was launched in April, when then-New York Attorney General Eric T. Schneiderman sent letters to 13 crypto exchanges, requesting information on their operations, internal controls and other key issues.