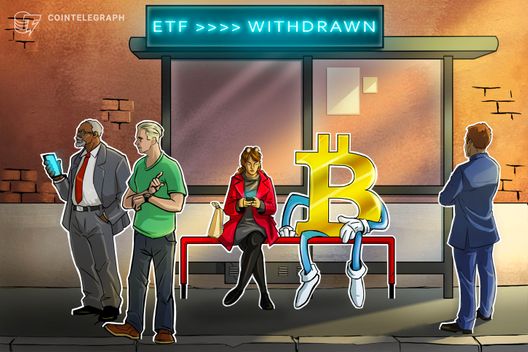 An ETF proposal filed by Reality Shares ETF Trust earlier this month has been withdrawn at the request of the Staff of the U.S. Securities and Exchange Commission.

The United States (U.S.) Securities and Exchange Commission (SEC) has requested the withdrawal of a proposed exchange-traded-fund (ETF) submitted by Reality Shares ETF Trust, according to a letter published by the SEC on Feb. 12.

In the document, the SEC specifies that the withdrawal was “at the request of the Staff of the U.S. Securities and Exchange Commission. No securities have been sold in connection with the offering of the Fund.”

Reality Shares ETF Trust — which is a unit of crypto-focused fintech firm Blockforce Capital — initially filed a proposal for an ETF, that would invest in a portfolio which includes both sovereign debt instruments and Bitcoin (BTC) futures, on Feb. 11. Subsequent to the SEC request, the ETF filing was withdrawn by Reality Shares.

In the application, the company stated that the proposed ETF was designed to “provide investment exposure to global currencies, both fiat and virtual currencies, that have been widely adopted for use (e.g., as store-of-value, international remittance, foreign-exchange trading) throughout the world.”

In regard to BTC futures, the fund would have invested via a wholly owned Cayman Islands-registered subsidiary in the cash-settled BTC futures that are currently traded on CBOE Futures Exchange (CFE) and the Chicago Mercantile Exchange (CME).

Earlier in February, Cointelegraph reported that American Investment management firm AdvisorShares and investments advisory company Sabretooth Advisors will jointly launch an ETF that tracks tech companies, including those involved with blockchain and cloud computing. The idea behind the new ETF is that entities involved with emerging technologies could reach increased profitability and rises in share prices within a reasonable time.

In the end of January, the Chicago Board Options Exchange’s, along with investment firm VanEck and financial services company SolidX, re-applied with the SEC for a rule change to list a BTC ETF. While the firms first filed with the SEC to list a Bitcoin-based ETF on June 6, 2018, the application process has since experienced several delays, as the SEC pushed back its decision on multiple occasions.