A new study from the Lucerne University of Applied Sciences found that the Swiss fintech market grew by 62 percent in 2018.

The Swiss fintech market grew by 62 percent in 2018, according to a recent study by the Lucerne University of Applied Sciences published on Feb. 27.

The Lucerne University of Applied Sciences undertook an in-depth review of Switzerland's fintech market for the fourth time. The report dubbed "IFZ FinTech Study 2019" reveals that on a global scale the cities of Zurich and Geneva remain in second and third place for the best cities for fintech, respectively. The fintech sector inside the country grew 62 percent over the previous year.

Per the analysis, Switzerland had 356 fintech companies in 2018, compared to 220 companies one year earlier. The growth is reportedly contingent on fintech distributed ledger (DLT) companies, representing a triple increase in number. More precisely, “of the total of 356 companies, 122 are in Distributed Ledger Technology, 66 in Investment Management, 56 in Banking Infrastructure, 42 in Deposit & Lending, 36 in Payment and 34 in Analytics.”

“Overall, a total of $386 million was raised last year from 15 ICOs, a decrease in both the number and volume of this funding. The largest ICO in 2018 was Envion, which received approximately $100 million, followed by Nexo and SwissBorg with $52.5 and $50 million, respectively.” 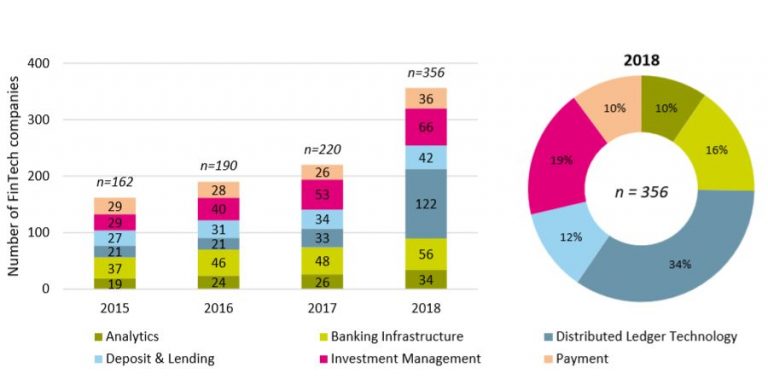 Number of Fintech companies in Switzerland. Source: The Lucerne University of Applied Sciences

According to a recent report by ICO rating service ICObench, Switzerland became the second top country in terms of the amount of money raised through ICOs in the fourth quarter of 2018, having reportedly raised $238 million.

As Cointelegraph reported earlier this month, the president of the Swiss Crypto Valley Association (CVA), Daniel Haudenschild, declared that the crypto bear market had damaged Switzerland’s position as a global blockchain hub. Haudenschild also noted that “great ideas are being shelved because they can’t find that funding,” further adding that “we need to bridge that by bringing back investors,” and “make Switzerland open and easy for companies to invest in blockchain projects.”