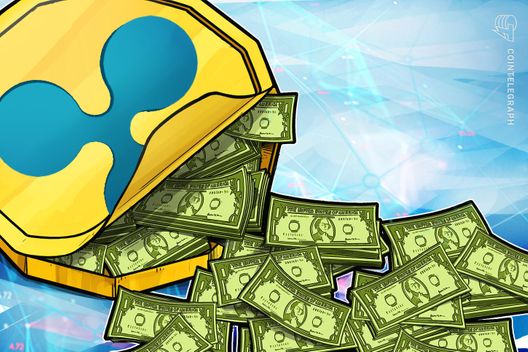 American tech company Ripple reported that its revenue from XRP token sales doubled in the third quarter (Q3) compared to the second quarter (Q2) of 2018, according to the company’s quarterly report published Oct. 25.

In the Q3 2018 XRP Markets Report, the company reveals that it sold $163.33 million worth of XRP in the Q3, which is more than double the $73.53 million it sold in the previous quarter. The sales were distributed between Ripple and its subsidiary XRP II, LLC, which saw $65.27 million and $98.06 million sales revenues respectively. 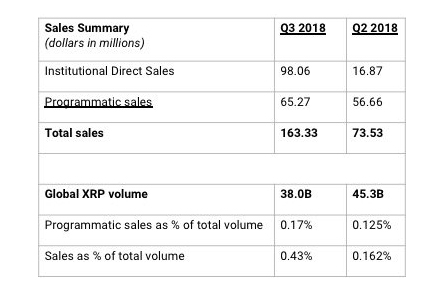 The sales volume in Q3 represents 0.172 percent of the total XRP volume traded globally, while in Q2 that figure was 0.125. In the Q3, Ripple released 3 billion — 1 billion each month — of XRP out of escrow, matching the same number released in the Q2. Ripple states in the report that the remaining 400 million XRP not returned to escrow is being used in different ways to support the ecosystem.

Ripple further notes that the volatility of XRP was weak throughout most of Q3 2018, with an increase in the last two weeks of the quarter and a surge in price.

Last month, Ripple announced it will lead a group of crypto startups called the Securing America’s Internet of Value Coalition to lobby lawmakers and financial regulators in D.C. The group aims to soften the government’s stance in order to encourage innovation and support competition in the ecosystem of global crypto markets.

Within the initiative, Ripple will pay Klein/Johnson Group, a bipartisan lobby group, to assist the crypto and blockchain community in conveying to regulators that the industry needs governmental support. The group will reportedly receive around $25,000 a month and 10,000 in XRP from the coalition.