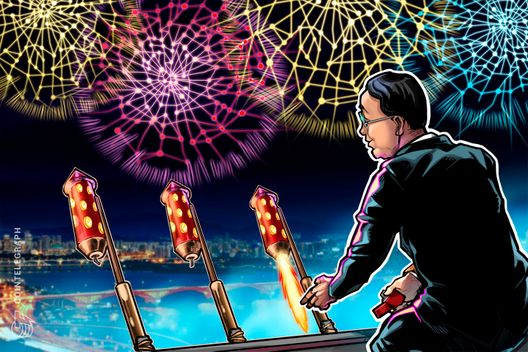 The crypto market and blockchain sector in South Korea is thriving with the involvement of major banks and conglomerates.

The crypto market and blockchain sector of South Korea, the third-largest digital asset exchange market in the world behind the United States and Japan, have some of the most robust systems and infrastructure in place to protect investors and facilitate the growing demand for cryptocurrencies.

The strong infrastructure of the country’s cryptocurrency market is primarily attributable to the involvement of major multi-billion dollar conglomerates and commercial banks that have assisted the growth of local crypto-related businesses over the past two years.

In late 2017, as the valuation of the crypto market achieved an all-time high of nearly $900 billion, interest toward cryptocurrencies peaked, and every national television network, publication, company and investor in the local market were discussing the viability of cryptocurrencies as an investment.

As Tony Lyu, the CEO of Korbit, the fifth-largest cryptocurrency exchange in South Korea, stated in an interview, the local financial market is often described as a copper pan — due to its tendency to overheat and cool down rapidly.

“Word just spreads really fast in Korea. Once people are invested, they want everyone else to join the party. There’s been this huge, almost a community movement around this.”

To address the surge in demand for crypto, major conglomerates started to get heavily involved in the local market since December of last year, which continued throughout 2018.

Overview of the involvement of conglomerates 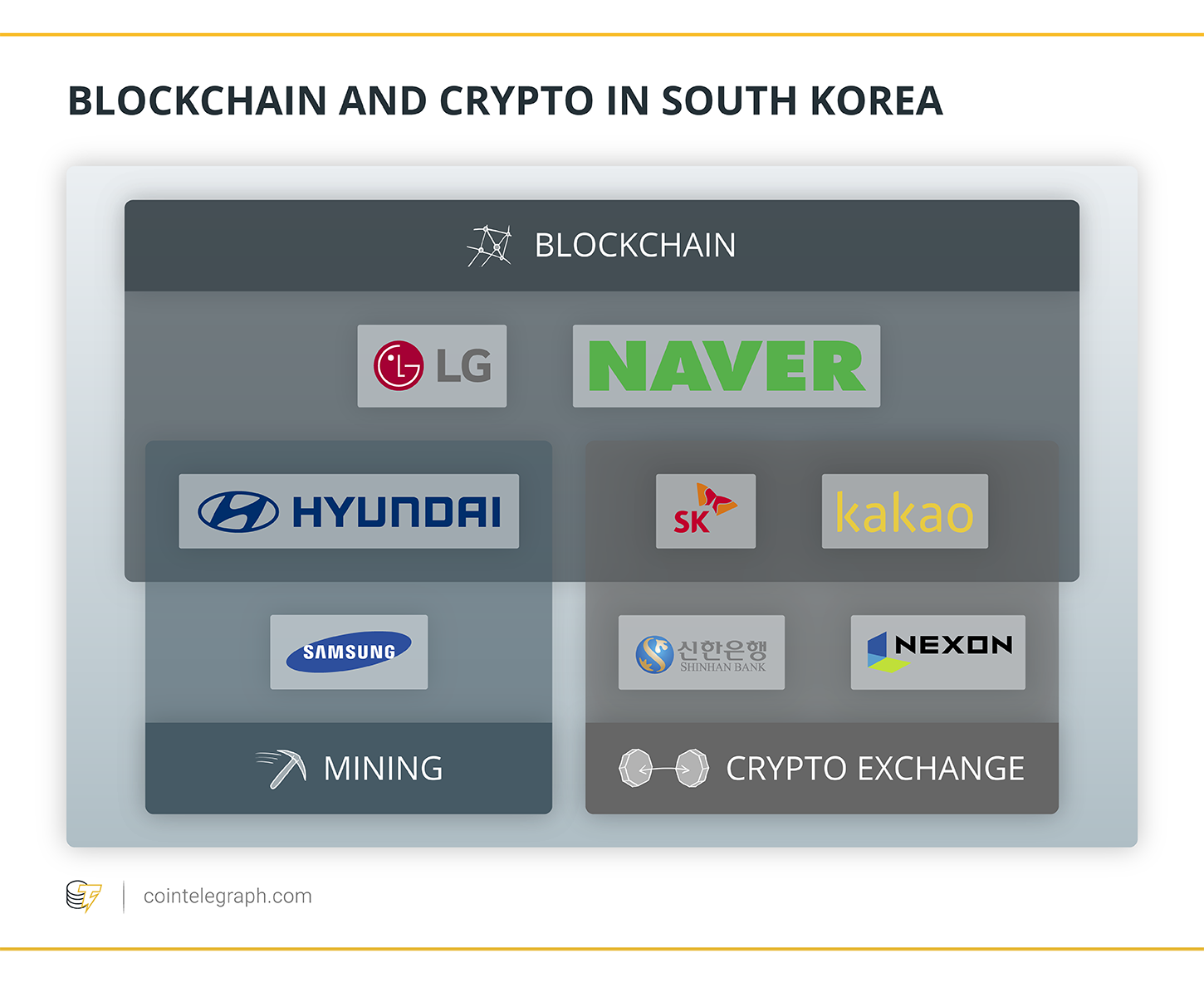 As of September 2018, every major multi-billion dollar company in South Korea remains actively involved in the cryptocurrency sector.

LG, the second-largest electronics manufacturer behind Samsung, has been developing a cryptocurrency trading platform, a blockchain-based, cross-border payment system, and Internet of Things (IoT)-focused blockchain network.

Over the past two years, LG has focused on building IoT-enabled electronics — like air conditioning systems, vacuum cleaners and refrigerators — that can be controlled by a cloud-based system. The priority of LG has been to create smart homes that allow anyone to control any appliance within the house with an app.

In the long term, through the deployment of its own unique blockchain system, LG is aiming to base INFioT, the firm’s IoT platform, and smart factory platform Factova on top of the blockchain.

To achieve this, the blockchain network integrated by LG’s IoT and smart factory platforms will need a level of scalability that is at least ten-thousandfold higher than existing public blockchain networks. As the transaction capacity of blockchain networks generally improve, it will be possible for LG and other conglomerates to deploy large-scale apps on peer-to-peer (p2p) networks.

Samsung — the biggest conglomerate in South Korea that has dominance over the insurance, real estate, electronics and payment sector — has been allocating most of the resources of its crypto and blockchain department in maintaining its cryptocurrency ASIC miner manufacturing foundry.

The electronics giant initially entered the cryptocurrency mining market back in January of this year, with the strategy of mass producing ASIC miners by leveraging its existing foundry in Suwon, South Korea. Hwang Min-seong, an analyst at Samsung Securities, said:

“Samsung Electronics could increase its revenues through ASIC chip manufacturing, but because the foundry only accounts for a small portion of the company’s semiconductor manufacturing plant, it is difficult to predict that the firm’s mining venture will have a significant impact on the company’s revenues.”

Hyundai, the leading automobile manufacturer of South Korea, has been operating a blockchain platform called HDAC through its subsidiary Hyundai BS&C.

SImilar to LG, since early 2017, Hyundai has been exploring ways to utilize the blockchain in fueling applications that can be applied to smart factories, smart homes, smart buildings and various industries. As the the HDAC development team explained:

“Also, M2M [machine-to-machine] transaction for mutual contracts and operation between IoT devices are implemented to bring a platform where rational consumptions and transactions are possible. It is also where we can implement Transaction Innovation.”

Hyundai BS&C has also been operating a mining pool, but in May, local publications reported that the mining pool of HDAC was hacked, leading to the loss of the miners’ funds.

SK and Shinhan Bank, the country’s largest telecommunications and financial institutions, have financed cryptocurrency exchanges to establish a better infrastructure to protect investors and facilitate capital moving from the traditional finance sector to crypto.

Upbit is operated by Kakao/Dunamu, Korbit is backed by SK and Softbank Korea, Gopax is financed by Shinhan Bank (the second-largest commercial bank in the country), and Coinone is financed by SBI Holdings, which invested in Coinone by purchasing equity in Dayli Financial Group.

Gopax, Upbit, Coinone and Korbit have not experienced any successful security breach or hacking attempt, which is important to note as all of these companies represent the reputation and track record of entities that are significantly larger than their operations.

Companies like SK, Kakao, Shinhan Bank and SBI Holdings that are valued at well over $10 billion would rather allocate a larger amount of revenues coming from the exchanges to prioritize security and compliance than maximize profits. These conglomerates, as for now, are not in the sector for short-term profits.

Unlike startups, major conglomerates in South Korea are active in the cryptocurrency sector because they plan to remain at the forefront of cryptocurrency and blockchain development as a long-term strategy.

Moreover, conglomerates are incentivized to run crypto exchanges and blockchain initiatives because the government of South Korea has recognized digital asset trading platforms as regulated financial institutions and established blockchain technology as one of the three pillars of the Fourth Industrial Revolution, alongside big data and artificial intelligence (AI).

The decision of Dunamu — which operates KakaoStock as a subsidiary of Kakao — to recently expand Upbit to Singapore and launch a fiat-to-crypto exchange in the region demonstrates the intent of the company to increase awareness of its brand.

The company’s CEO, Lee Sir-goo, stated that in the upcoming years, it will continue to build a bridge between the local crypto market of South Korea and the global market.

“One of the key functions of a crypto-asset exchange is to connect the real economy to cryptocurrencies, and we believe we can provide this bridge between Korea and the global market. We hope the blockchain regulatory guidelines will be established soon in Korea so that companies here can continue to grow their competitiveness.”

Investors in the local market are expected to continue remain highly optimistic by the involvement of Shinhan Bank in the sector, as it guarantees stable banking services in the local cryptocurrency market. There exists no risk of banks refusing to provide financial services to exchanges because the second-largest financial institution in the market operates an exchange.

This week, the volume of Upbit and Bithumb increased by 345 percent and 134 percent respectively, as the crypto market added $20 billion to its valuation.

The most recent partnership established between a local conglomerate and a blockchain project in South Korea is the collaboration of ICON and SK Planet in utilizing the blockchain to power the country’s most widely utilized mileage system.

In July, SK disclosed its plans to use cryptocurrencies to compensate and incentivize users of OK Cashbag, which supports 35 million members in its mileage and membership system, which is more than 50 percent of the entire population of South Korea, estimated to be 51.25 million.

“OK CashBag has approved the initiation of OKX Project, a blockchain technology-based project, and is currently in a phase of reviewing various business models and incentivization methods. But, SKPlanet will not engage in any ICO or fundraising pertaining to OKX Project.”

On Sept. 20, ICON, the most valuable blockchain project in the country, signed a memorandum of understanding (MoU) with SK Planet to link the ICON blockchain network with OK Cashbag and develop mid- and long-term strategies to commercialize the blockchain in the country.

“Blockchain appears to be one of the key technologies that will promote market transformation in existing industry for the medium and long term. SK Planet will work with ICON to derive synergies in various fields so that we can offer differentiated benefits to our customers.”

With its involvement in Korbit, SK remains one of the most active conglomerates in the local cryptocurrency and blockchain sector.

“With more hospitals and insurance providers on board, ICONLOOP will go through a pilot test by September 2018 and launch a formal operation starting October.”

The reputation of ICON in South Korea comes from its partnership with the government in bringing talent to the blockchain sector by training university graduates and inexperienced individuals to develop expertise in blockchain development.

As Cointelegraph reported in July, the government of South Korea introduced its first cryptocurrency and blockchain legislation in history, after refusing to regulate the market. For many years, government were skeptical towards establishing regulatory frameworks because it believed that it will legitimize the cryptocurrency sector.

Consecutive hacking attacks experienced by Bithumb, Coinrail, and many other cryptocurrency exchanges ultimately forced the government to draft a legislation around crypto and blockchain to protect investors.

Shortly after releasing the first draft of the crypto legislation, the government recognized the blockchain as one of three main technologies in the fourth industrial revolution, promoting the training of blockchain.

Won Young-kyung , a software policy officer at the Ministry of Commerce, Industry and Energy, said:

“Although the youth employment issue is emerging as a social problem, the problem of job mismatch is serious.”

But, despite the optimistic approach of the government toward regulating the space, in September, South Korea’s venture enterprise division decided to remove crypto exchanges from the newly drafted venture acceleration bill.

The venture acceleration bill, which provides small to medium-sized companies a wide range of benefits — including tax reduction — eliminated cryptocurrency exchanges alongside casinos and alcohol distributors, placing crypto-related business in the same category as organizations that handle gambling.

The questionable decision of the venture enterprise division led investors and companies in the crypto sector to outrage. Experts in the cryptocurrency market have stated that if the bill is passed in its current form without crypto-related businesses, it will negatively impact the economy of South Korea, as it will drive away investors from local exchanges and prevent venture capital firms from supporting the country’s crypto exchanges.

Direction of the market

While the decision of the venture enterprise division of South Korea remains to be seen, overall, the cryptocurrency industry of South Korea is thriving with the involvement of multi-billion dollar conglomerates and banks.

Crypto-related businesses and blockchain projects are receiving both financial support and resources from local corporations that are able to build sufficient infrastructure to meet growing demand from retail traders and institutional investors.

As regulatory frameworks around cryptocurrency exchanges and blockchain projects improve, with companies like SK, Samsung, LG, Hyundai and Kyobo involved, the crypto market of South Korea could be expected to grow at an exponential rate.