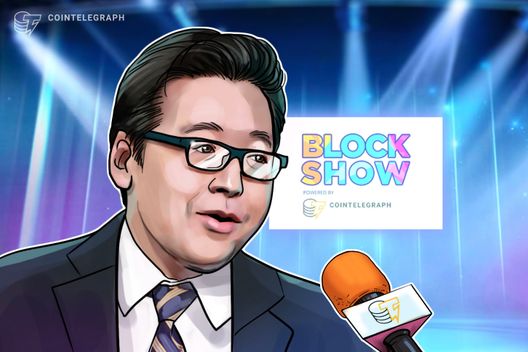 An interview with Mr. Thomas Lee, a Fundstrat Global Advisors co-founder, a Wall Street analyst, and a speaker at Asia Blockchain Week 2018.

Blockshow is announcing a new conference – Asia Blockchain Week, which will be hosted in Singapore from Nov. 27 until Dec. 1, 2018. The blockchain and cryptocurrency conference will attract over 100 of the top industry leaders and crypto influencers, and more than 2000 attendees, from over 50 countries. The venue for this event will be held at one of the most beautiful locations in Singapore, the Marina Bay Sands Luxury Hotel.

One of the most anticipated speakers, Mr. Thomas Lee, is a Fundstrat Global Advisors co-founder and a Wall Street analyst with over 25 years of equity research experience. He has consistently been ranked as the top institutional investor every year since 1998. Thomas Lee was one of the first “traditional finance” professionals that was talking about Bitcoin, and he is well-known for his positive attitude towards cryptocurrency.

Some of his recent quotes are: “Ethereum will rally strongly up to $ 1,900 by the end of 2019” and “Bitcoin could end the year explosively higher,” referring to an upcoming Bitcoin and cryptocurrency market trend reversal.

The Blockshow team met with Mr. Thomas Lee during BlockShow Americas in Las Vegas to ask him why he believes Bitcoin will have a great next year, and whether he is expecting a financial crisis to happen imminently.

BlockShow: In your opinion, what will be the most profitable cryptocurrency next year? Will it be one of the well known currencies or do you expect some new players to have conquered the market?

BlockShow: What specific expectations do you have for Bitcoin in 2019?

Mr. Thomas Lee: Bitcoin should have a great 2019, as many of the questions that are affecting cryptocurrencies this year are then behind us. That means we have regulatory clarity as well as the launch of ICE/BAKKT.

BlockShow: What do you think about the prediction of J.P. Morgan, that the next major financial crisis will strike the U.S. economy by 2020? Is that something you can agree with?

Mr. Thomas Lee: In my opinion, a financial crisis will be inevitable to take place but the exact timing will quite uncertain. There is a greater leverage today and the global central banks have less “wiggle” room because of the current low rates. With that being said, I am not expecting an imminent crisis.

BlockShow: Do you believe it will be possible, that the entire Asian region will become crypto-friendly in the future?

Mr. Thomas Lee: Asia is a region where I expect crypto to flourish. There is a large population of young people and countries are technically savvy. Also, there are already extensive use-cases of digital money and platforms such as WeChat and others.

BlockShow: When will Bitcoin break-out of its long-run bear trend?

Mr. Thomas Lee: Bitcoin is preparing to breakout. It has found support around the $6,000 level, which equals the breakeven for mining costs.

BlockShow: How do you think events influence the blockchain industry?

BlockShow: What is your opinion on the U.S. Dollar backed stablecoin USDT? What do you expect?

Mr. Thomas Lee: I am comfortable that USDT is backed by USD and I have confidence in the Tether team.

BlockShow: What do you expect from stablecoins?

Mr. Thomas Lee: Stablecoins are a novel idea and I hope they work.

Tickets are available on the official BlockShow Asia website. There are also opportunities to sign up and contribute as a sponsor. Buy your tickets now and secure your front row seat for the best Blockchain Industry conference in the world!