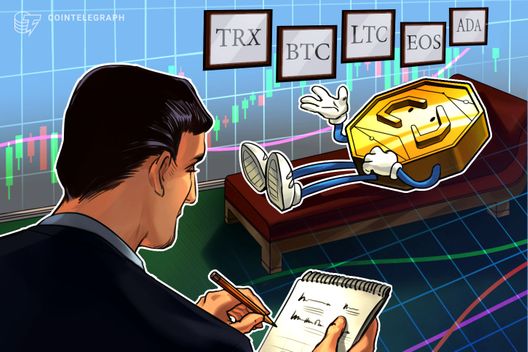 On October 11, the total market capitalization of the cryptocurrencies plunged below $200 billion for the first time since September 20, as a global risk-off trade led investors to dump their holdings. However, the encouraging sign is that the sell-off was short-lived and most currencies are trying to claw back.

The next week is critical because it will provide insight on whether the currencies will break down of their key supports or rise above their overhead resistances. A breakdown to new lows will be negative and might signal the extension of the ongoing bear market. On the other hand, if the bulls succeed in scaling the key levels, it will signal a likely bottom and might attract buying.

Let’s take a look at the top 5 performers of the week and their medium-term outlook.

Among the digital currencies that have a market capitalization of more than $1 billion, TRON is the only one that has managed to stay in the green in the past seven days. Two news stories attracted buyers in a range bound/falling market.

The first news that pushed prices higher was the tweet from Justin Sun, CEO of TRON on October 08. He said that the latest upgrade would make the digital currency “200x faster than Ethereum and cost 100x cheaper than EOS.”

The second news that led to higher prices was the tweet on October 12 that hinted at a partnership with an industry giant.

So, can this fundamental news propel prices higher and should the investors buy now? Let’s study the charts and find out.

The TRX/USD pair topped out at $0.35013935 on January 05. At the current levels, the price is down about 93 percent from the highs. Since August 14, it has stopped falling and is trying to form a range. Such a consolidation shows that the owners of the digital currency are in no hurry to sell their holdings. Additionally, the investors are buying on dips, close to $0.0183.

The range has seen two touches at the top and two at the bottom. If the bulls break out and sustain above the range, it will indicate the probable start of a new uptrend. The first pattern target is $0.03801042. However, when the breakout happens after a large consolidation, it easily overshoots the minimum pattern target. Therefore, in the medium-term, investors can expect a move to $0.0415 followed by a rally to $0.052.

If the bears sink prices below $0.01587681, the downtrend will resume. Therefore, we suggest traders wait for a confirmed breakout and only then initiate a long position.

The sell-off in the global stock markets caught up with Bitcoin. The warning by International Monetary Fund (IMF) that the “rapid growth” of the new asset class could create “new vulnerabilities in the international financial system," did not help matters either.

Global economist Nouriel Roubini continued his anti-crypto rhetoric. He called cryptocurrencies “the mother or father of all scams and bubbles,” and the blockchain technology as “nothing better than a glorified spreadsheet or database.”

Another study from Juniper Research warned of an implosion in the crypto markets. Still, the BTC/USD pair ended as the second-best performer among the mega cap digital currencies. So, does this signal buying at the lows?

On a medium-term timeframe, Bitcoin has formed a large descending triangle pattern. It has formed successive lower highs but has largely held the $6,000 levels in 2018. Each lower high shows that the sellers are in a hurry to short or liquidate their positions and are not waiting for higher levels. The bulls have been buying only on dips close to $6,000, which has resulted in the support being held.

If the bears break the $5,900 levels, it is likely to attract further short selling and long liquidation, pushing prices to $5,450 and $5,000 levels. The first sign of a change in trend will be a close above the downtrend line of the triangle.

Investors should wait for a breakout above the most recent low of $6,831.99 to sustain for about three days before turning bullish.

The LTC/USD pair has been in a steady downtrend. Previous attempts to stabilize and start a new uptrend have failed at higher levels. For the past two months, the digital currency has been consolidating in a tight range near the lows. A breakdown of the range will resume the downtrend.

If the bulls succeed in breaking out of the range, a rally to $94 levels is possible. A new uptrend will be confirmed only after the virtual currency successfully defends the breakout of the range and makes a series of higher highs and higher lows. Until then, it is best to remain on the sidelines.

The EOS community is trying to bridge the gap between the West and the East. Language barriers, cultural differences and use of different platforms for conversing with each other were causing issues to the Chinese users. The EOS Mandarin Arbitration Community (EMAC), created to help the Mandarin-speaking users, is believed to be able to bring the two continents together.

In the medium-term time frame, the EOS/USD pair has largely been range bound between $18.67-$3.8723. Both the top and the bottom of the range have been tested twice. Though the bulls broke out of the range in end-April, they could not sustain the highs and prices crashed back into the range.

Charles Hoskinson, founder of Input Output Hong Kong (IOHK), and Ken Kodama, CEO of Emurgo have demanded the resignation of Michael Parsons, chairman of the Cardano Foundation. They have cited lack of performance and the non-responsive attitude of the council and the chairman as a “great frustration.” The Foundation is yet to respond.

The possibility of Coinbase listing the coin is doing the rounds. If successful, it might give a boost to Cardano’s price. So, is it worth buying? Let’s find out.

The ADA/USD pair has been in a long-term downtrend. It has fallen about 94 percent from the highs of $1.396281, reached on January 05. Various attempts to start a new uptrend have failed as higher levels attract selling.

For the past one month, the digital currency is trying to form a range close to the bottom. If the bears break down of $0.060105, it will resume its downtrend.

On the upside, the bulls will have to scale $0.094256 and $0.111843 to signal strength. A sequence of higher highs and higher lows will herald the start of a new uptrend. If the bulls breakout and close (UTC time frame) above $0.111843 for three days in a row, a move to $0.2-$0.23 is probable. Medium-term traders should wait for a new uptrend to start before initiating any long positions.