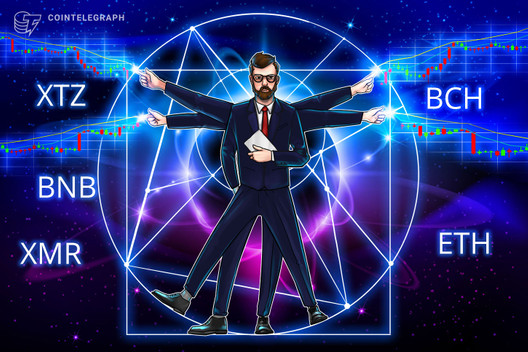 Does the crypto market’s previous extended downtrend mean that it is now in an accumulation phase?

An extended downtrend usually goes through an accumulation phase before starting a new uptrend. Digital assets fund Adamant Capital believes that the crypto markets are currently going through that phase.

Currently, about 3% of American retirees have invested in Bitcoin, according to a recent survey. 56.7% of the retirees have heard of Bitcoin, but are reluctant to invest. This might be due to the long and crushing bear market. When the markets start rising and enter a bull phase, many of these are likely to enter the markets. Clarity on regulations from the government will also result in greater participation. Andrew Yang — a United States Democratic presidential candidate for the 2020 elections — is in favor of implementing clear regulations on digital assets.

The Chinese President Xi Jinping is bullish on the prospects of the blockchain technology for the future. Though cryptocurrency trading is banned in China, the ruling party sees the renminbi as a cryptocurrency in about 20 years, according to Donald Tapscott, executive chairman of the Blockchain Research Institute. However, how much support a centralized cryptocurrency launched by a central bank will receive in the community is yet to be seen.

Tezos (XTZ) was the best performer among the major cryptocurrencies in the past seven days. The market participants cheered the comments by French finance minister Bruno Le Maire on Tezos and the blockchain industry. In an interview to French magazine Capital, the minister said that France is looking to invest over $4.5 billion euros in innovative industries, including blockchain, in the next five years. Is Tezos worth a buy even now or will it enter a correction? Let’s find out.

The XTZ/USD pair has seen a strong pullback from the lows. From a low of $0.33, it has risen to the current levels, which is a rise of over 300%.

It is presently trying to break out of the overhead resistance of $1.295480, but is facing resistance close to the 50-week SMA. The 20-week SMA has started to slope up and the RSI has jumped into the positive territory. This suggests that the bulls have the upper hand.

We anticipate a stiff resistance between the 50-week SMA and $1.85. After the sharp recovery from the lows, we anticipate a minor correction or consolidation. However, if the momentum pushes the price above $1.85, the rally can reach $2.75 and above it to $4.20.

After a sharp run-up, it is always better to wait and enter on a consolidation or a minor dip.

Analysis by the Binance research team concluded that the crypto winter might be coming to an end. We believe the resurgence is being led by binance coin (BNB), which is the best performer among major cryptocurrencies and might become the first to scale the highs made during the bull run in January of last year.

Crypto exchange Binance earned $78 million in profits in Q1 2019, a growth of 66% over the comparable quarter of the previous year. Binance CFO Wei Zhou said that the profits were boosted by the surge in OTC trades. The exchange has launched its mainnet and plans to execute the swap of binance coin on April 23. Also this week, Binance has started a campaign to support the reconstruction of the Notre Dame Cathedral.

The BNB/USD pair is on fire: it is close to breaking the previous high of $26.4732350 made in early January of 2018. This is a major sentiment booster as it gives confidence to the traders that the best is yet to come for the cryptocurrencies with strong fundamentals.

As the pair moved up, it picked up momentum. While this is a bullish sign, it has also pushed the weekly RSI into deeply overbought zone. This increases the possibility of a minor correction or consolidation; however, it is difficult to time it. When the momentum is strong, overbought markets can become even more overbought.

While the investors holding the cryptocurrency can stay put with an appropriate stop loss, it might be dicey to take a new position at the current levels, as the risk to reward ratio is not attractive.

Bitcoin cash (BCH) was the main beneficiary of bitcoin SV’s delisting by major crypto exchanges this week. In another move, SBI Holdings has conversely said that it will delist bitcoin cash from its exchange in June 2019. The company has stated that the decision to delist bitcoin cash was premeditated, and had nothing to do with its partnership with nChain (whose chief scientist, Craig Wright, is the founder of BSV).

The BCH/USD pair had surged the week before. After the sharp move, the previous week saw mild correction. This week, the pair is again attempting to break out of the overhead resistance at $363.30.

If successful, it can move up to $451.32. The 50-week SMA is close to this level; hence, this might act as a resistance. But if the bulls breakout of this resistance zone, a rally to $600 can be on the cards.

Meanwhile, the 20-week EMA is flat and the RSI is close to the center. This points to a consolidation for a few more weeks. However, if the bears sink the digital currency below the support zone of $255 and the 20-week EMA, a fall to $166.25 is probable.

Cryptocurrency exchange Coincheck has added ether (ETH) to its over-the-counter offering. Ethereum core developers are debating whether more frequent and smaller hard forks are better than the larger and less frequent hard forks. The decentralized platform needs to be on its toes to ward off the increasing competition.

The ETH/USD pair is facing a stiff tussle between the bears and the bulls at the critical $167.32 level. While the bulls scaled this level in the week before, completing an ascending triangle pattern, they could not build up on the gains.

Last week, the bears attempted to sink the pair back into the triangle. This week, the bulls are again trying to keep the price above $167.32.

If the bulls succeed in pushing the price above $187.98, the digital currency can rally to its target objective of $251.64. On the other hand, a breakdown of $167.32 and the 20-week EMA will turn the tables in favor of the bears. The next couple of weeks are critical for the cryptocurrency, as it will determine the next directional move.

Monero (XMR) celebrated its fifth anniversary this week with a slew of events. Can the fifth best performer of the past week better its performance in the coming weeks? Let’s find out.

The XMR/USD pair has been sustaining above the breakout level of $60.147 and the 20-week EMA for the past two weeks. This is a positive sign and it increases the possibility of a breakout above $81.

On the other hand, if the price fails to scale above the overhead resistance, it can remain range bound between $60.147 and $81 for a few weeks. The pair will weaken if the bears sink the price below $60.147.

The market data is provided by the HitBTC exchange. Charts for analysis are provided by TradingView.