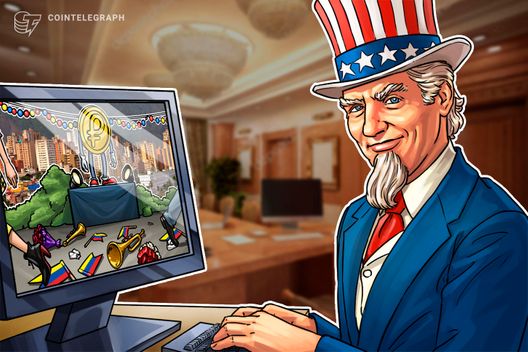 In its statement, the Treasury accused Evrofinance — which is reportedly jointly owned by Russian and Venezuelan state-owned companies — of materially assisting efforts to launch the cryptocurrency, which it characterized as a “failed” project:

“When the failed Venezuelan cryptocurrency, called the Petro, launched in 2018, Evrofinance emerged as the primary international financial institution willing to finance the Petro. Early investors in the Petro were invited to buy the cryptocurrency by wiring funds to a Venezuelan government account at Evrofinance.”

The Treasury further claims that Evrofinance’s involvement in the Petro is testament to “Maduro’s hope that the Petro would allow Venezuela to circumvent U.S. financial sanctions.”

According to the statement, Maduro’s predecessor, Hugo Chavez, acquired a 49 percent stake in Evrofrinance via the Venezuelan National Development Fund back in 2011.

“At the time of its incorporation,” the statement continues, “Russia’s Gazprombank, in which the majority Russian state-owned gas producer Gazprom is a shareholder, and Russian state bank, VTB Bank, which is Russia’s second largest bank, each owned a 25 percent stake in Evrofinance.”

While other major U.S. and European-based banks have reportedly cut off ties with Maduro’s regime, the Treasury accuses Evrofinance of profiting by upholding its relationship with the Venezuelan government:

“This action demonstrates that the United States will take action against foreign financial institutions that sustain the illegitimate Maduro regime and contribute to the economic collapse and humanitarian crisis plaguing the people of Venezuela.”

Evrofinance is further accused of supporting Venezuelan state-owned oil company PDVSA, which has been under U.S. sanctions as of January 2019. PDVSA notably introduced the Petro as a unit of account for trading of Venezuelan crude oil last fall.

As reported, Jorge Farias — the CEO of Venezuelan crypto startup Cryptobuyer — has alleged that the highly contentious Petro is in fact backed by PDVSA, telling reporters last August that:

“One Petro is […] supposedly backed by oil barrels produced by the national oil company PDVSA; the catch: PDVSA also has debts amounting to $45 billion.”

Cointelegraph has traced the increasingly vexed fate of Petro, which continues to unfold against a backdrop of political and economic turmoil. Venezuelan opposition leader and self-declared interim president Juan Guaido — recognized by Germany, the U.S. and Canada, among others — dismissed Maduro’s Petro as “a scam” as early as December 2017.