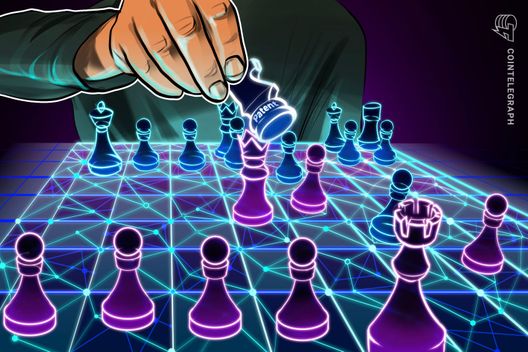 What is a ‘subnet’ and how the financial services giant is going to partition a blockchain.

On October 9, American financial services giant Mastercard was granted a patent for a method to partition a blockchain so that it can store multiple transaction types and formats. The filing published by the U.S. Patent and Trademark Office (USPTO) reveals the details of the new system — not the first of the kind for Mastercard.

Why would you need to partition a blockchain?

Now, imagine a company that wants to use blockchain technology to store different kinds of data or use multiple cryptocurrencies for their business. It will have to run multiple blockchains, because, as per the recent patent’s filing, the transaction records are “often required to be of the same format and include the same types, and sometimes even sizes, of data.” Consequently, this company will also have to be able to afford all the extra resources and computing power involved.

This problem might be caused by varying degrees of permissioned or open access of blockchains. On the one hand, there are non-permissioned blockchains that allow anyone to view record or be part of it — just like the aforementioned BTC and ETH with their public ledgers. On the other hand, they can also be permissioned — those require special permissions to read, access, and write information on them. They are more common among industry-level corporations, for whom security, identity and role definition are crucial.

Mastercard’s new patent claims the inflexibility of blockchains in terms of data formatting restricts the usage of permissions on permissioned blockchains:

So how would that work?

Mastercard’s new system aims to expand blockchain’s utility by allowing blocks to receive data from “a plurality of subnets”.

“Subnets” are proposed partitions, which would be internally consistent but would interact in a wider, single system: “a subnet may have rules about data in a transaction record, the organization of the data, the size of each data value, and the hashing algorithms used in the formulation of the subnet’s merkle root.” Therefore, subnets would be able to receive information from different computing devices and allow to add data of any kind and size without following a standardized data format. However, the amount of subnets is limited, as the proposed system supports a maximum of three.

Not a first for Mastercard: ambitious plans for blockchain

Mastercard first applied for the above mentioned patent back in July 2016 — it is a time consuming process. The patent office publishes applications up to 18 months after they are filed, and it can take years to decide whether to grant patent protection.

However, the grant for a partitioned blockchain is just one of many for Mastercard. Its first blockchain-related patent was approved in November 2017 titled "method and system for instantaneous payment using recorded guarantees". Since then, the company has come a long way in terms of studying the technology: according to IRP Daily’s August report titled “2018 Top 100 Global Blockchain Patent Enterprise Ranking”, the American credit giant is the third largest with a hefty 80 patent filings, surpassed only by Alibaba and IBM, which makes it a key participant of the potentially forthcoming patent war in the field of blockchain.

Just last month, USPTO published Mastercard’s series of three similarly-written patent applications, where the company argued that the distributed ledger technology (DLT) could significantly simplify business-to-business (B2B) transactions, noting that “21st century B2B collaboration sits on an unwieldy, unconnected and largely unchanged mid-20th century B2B payments platform”. Blockchain, in turn, as the patent authors argued, would store data in a system that is easily accessible by involved firms and is highly-resistant to forging.

Previously in July 2018, Mastercard filed a patent for consumer protection and payment transactions based on DLT. In it, the company described the form of a public blockchain-based method for linking assets between blockchain and fiat currency accounts.

Securing blockchain-related patents does not necessarily mean that the company will go on to create those new systems — whilst blockchain remains a relatively new field, some players just want to stake their claim before taking action. For instance, Bank of America — another top patent applicant — so far have prioritized having a registered technology over actually using it.

In 2016, Catherine Bessant, chief operations and technology officer at Bank of America, told CNBC that having blockchain-related patents is “very important … to reserve our spot even before we know what the commercial application might be.” Notably, those endeavors didn’t prevent the company from calling Bitcoin ‘troubling’ and uplifting its decision to ban customers from purchasing crypto.

The notable activity of Mastercard towards blockchain is backed by the ambitious statements, highlighting the company’s fundamental interest to the technology. In September, Ken Moore, the executive vice president and head of Mastercard Labs, told The Irish Times — on of the biggest Irish daily newspapers —the company’s Dublin-based unit was going “beyond the hype that surrounds new technologies such as blockchain to develop real, grounded services and products” that would be introduced the wider group. “This is not exploratory work for us,” he added, following Mastercard’s announcement that it plans to create 175 new jobs in Dublin with “new roles including blockchain specialists, data scientists and cloud infrastructure specialists”.