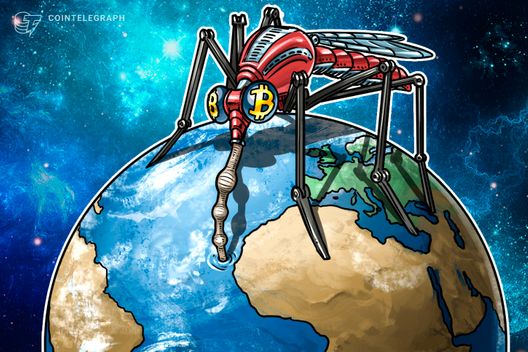 A new report from climate change scientists has raised concerns regarding Bitcoin’s carbon footprint and its potential future impact on global warming.

A new report from climate change scientists has raised the alarm over Bitcoin (BTC)’s carbon footprint and its potential future impact on global warming, published on Nature.com Oct. 29.

The report extrapolates existing data for Bitcoin’s electricity consumption together with various projections for the cryptocurrency’s adoption in coming years.

According to the report, in 2017, out of a rough total of 314.2 billion cashless transactions, Bitcoin’s share is estimated to have been around 0.033 percent. While acknowledging that “accelerated growth” is common at the early adoption stage of new technologies, the report nonetheless claims that even if Bitcoin follows a lower-level “median growth trend,” it could come to equal the global total of cashless transactions “in under 100 years.”

Should this materialize, cumulative emissions of Bitcoin usage would “cross the 2 C threshold within 22 years” if its adoption rate is similar to some of “the slowest broadly adopted technologies,” or within just “11 years” if adopted at the fastest rate of adoption. The carbon footprint forecast assumes that the fuel types used to generate power today will remain “relatively fixed” in future years.

For Bitcoin’s current carbon footprint, the report references recent research from Digiconomist calculated “on the assumptions” that:

“60 percent of the economic return of the Bitcoin transaction verification process goes to electricity, at $0.05 per kWh and 0.7 kg of carbon dioxide-equivalent (CO2e) emitted per kWh, [resulting in an] estimate that Bitcoin usage emits 33.5 metric tons of CO2e annually, as of May 2018.”

While refraining from predicting Bitcoin’s “fate,” the scientists suggest that economic logic will prompt miners to migrate to areas with low cost power supplies, therefore proposing that “electricity decarbonization could help to mitigate Bitcoin’s carbon footprint — but only where the cost of electricity from renewable sources is cheaper than fossil fuels.”

Should energy costs remain high, more efficient hardware may help reduce its footprint, the report concedes, yet advises against relying on “yet-to-be-developed hardware.” It instead proposes “simple modifications to the overall system, such as adding more transactions per block or reducing the difficulty or time required to resolve the proof-of-work” in order to “immediately” reduce Bitcoin’s electricity consumption.

Not all energy experts concur with the common perception that high energy consumption is an “Achilles Heel” for Bitcoin. A report published in August critiqued the exclusive focus on mining’s energy-intensivity, emphasizing the importance of where the energy is produced and how it is generated, arguing that “electricity production can increase while still maintaining a minimal impact on the environment.”